Who will Die First?

ICYMI – GOT episode 2 synopsis lead up to episode 3:

We’re two episodes deep into the last season of Game of Thrones, and not much has happened yet. Everyone of the living has gathered at Winterfell.

Jaime reveals Cersei’s deception to the Targaryen–Stark alliance and, despite Daenerys’s and Sansa’s mistrust, joins their forces after Brienne vouches for him. Jaime later apologizes to Bran for crippling him, with Bran saying he is not angry and they are no longer the same person.

Tyrion loses Daenerys’ favor for having trusted Cersei, prompting Jorah to ask her to forgive him. Daenerys fails to gain Sansa’s trust through their mutual love for Jon after refusing to give any assurances about the North’s fate. Theon, Edd, Tormund, and Beric arrive at Winterfell, with the latter three reporting House Umber’s fall. Bran proposes that he lure out the Night King, who intends to destroy the Three-Eyed Raven. His plan is reluctantly accepted, with Theon and the Ironborn offering to protect him.

Gendry finishes a special weapon for Arya, who then seduces him. Tyrion, Jaime, Davos, Brienne, Podrick, and Tormund share a drink, during which Jaime formally knights Brienne. Jorah fails to dissuade Lyanna Mormont from fighting and receives House Tarly’s ancestral sword as a gift from Sam. As the Army of the Dead approaches, Daenerys finds Jon at Lyanna Stark’s tomb and learns about his Targaryen lineage and claim to the Iron Throne.

Her thoughts are unknown, you can assume that Daenerys is not happy. Will her ambition to be the sole heir to the throne, jeopardize Jon Snow in this soon to come episode 3 battle?

Episode three looks to be the first big battle, and Mybookie has odds for who will Die First.

GAME OF THRONES – TO PERISH FIRST IN SEASON 8 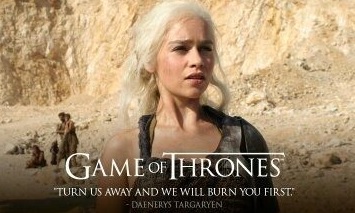 Death Matchups (Who will die first)

This could be my favorite line of the bunch, as I don’t really see why Arya should be favored here. In fact, I actually think Sansa is the most likely to die of all the Starks. If there’s one thing we’ve learned in the series so far it’s to never bet on a Starks survival, and Sansa is the hardest to trust. She’s not exactly a force in anyway, be it in power or intelligence. She also has Cersei to deal with, who definitely wants her dead.

“In the first Episode of the Series when they find the Direwolves there is one for each of the Stark children.  It also has been theorized that the dead Direwolf and Stag represented how Ned and Robert die.  So I think that the lives of the wolves are connected to their Stark counterparts. But the ones who perished have also lost their owners.  The only exception to this is Sansa, who has sadly lost her Direwolf, Lady.”

If this theory is correct, Sansa will be the next Stark to die. Putting what you may think about Sansa aside, the reason this is such a safe bet is because of Arya. Can she even die? She’s experienced what should’ve been mortal wounds countless times and her training with the Faceless Men make it seem like she’s untouchable. Plus, she can shift into anyone she wants to be so how is anyone ever going to get to her?

I also think that her character arc is that of someone who will be an integral part of the final episodes, so I think she at least makes it that far. I think the most likely scenario for Arya is her sailing off at the end of the show to explore other parts of the world, like she’s stated she wants to. GoT is not shy about killing our favorite characters, so this could go either way. But at positive odds, I like the juice way too much with this one.

This pick has a lot more to do with gut feeling than anything else, but it’s still a pretty strong one.

Right now, nobody truly understands what’s going on with Bran. But one thing a lot of people agree with is that he’s destined for the throne. However, nothing ever goes as planned or thought on this show, so expect the unexpected.

On the flip side, everyone is banking on Jon Snow to die. People think they’re being smart when they say Jon Snow will die because all the characters you don’t think will die (which Jon Snow should be) eventually die. Therefore, they’re thinking one step ahead of George R.R. Martin.

But we all know this isn’t how it goes; he baits you into overthinking and totally switches it up on you. Therefore, expect Bran to die in an unexpected way and Jon to live. Or don’t.